Note: with cartoons, political = editorial (for the most part)

In America’s current political climate, many artists have published cartoons that criticize the (political, societal, etc) system. This is not a new phenomenon. The idea of “political” or “editorial” cartoons has been around since Leonardo da Vinci. da Vinci did a series of caricatures

focusing on deformities and the grotesque, in which he would dramatize and parody a person or person’s features. Much later, caricatures would become the basis for political cartoons, using allusions (creating context) to satirize and critique the establishment in a single panel.

Many art historians cite William Hogarth and James Gillroy (both living in the 18th century) as the fathers of the political cartoon. While there were many other influenctial artists along the way, Ben Franklin‘s “Join or Die” cartoon is one of the most important (and popular) American political cartoons as it was the first printed in the United States. Franklin’s cartoon symbolized colonial unity during the French and Indian War and was used again during the Revolutionary War to rally the colonies against Britain. This cartoon is of particular interest because it didn’t critique the enemy but turned the finger towards the self as if to say “Why aren’t we standing together and fighting back?”

When the 20th century came around, editorial cartoons grew in popularity thanks to the industrial revolution, expansion of newspaper printing, and World War I. With world wide turmoil, there was much to critique including the League of Nations which many people thought was useless.

FUN FACT: Dr. Seuss made several cartoons speaking out about issues such as “America First”, racism and political corruption. 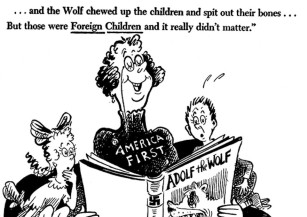 Today, political cartoons remain popular due to the current American government and the way social media allows artists to share their work with the world. Magazines like The New Yorker and many newspapers still publish editorial cartoons everyday

which have made waves on social media as well. The artistic style of political cartoons have changed a lot throughout the past few centuries, but satire and change has always been at the center of the art.

This week’s comic is my commentary on the net neutrality discussions.

Come Laugh With Me!